Bedford Borough Council’s brand-new solar farm has been fully energised and is now exporting low-carbon electricity to the grid. The project is made up of over 8,000 solar panels, is capable of generating up to 4.2MW of electricity and is enough to power approximately 1,000 homes.

Guests from South East Midlands Local Enterprise Partnership (SEMLEP), Bedford Borough Council and Vital Energi gathered to celebrate the event at an official grand opening on 28th July 2022 and the opening was marked by the cutting of a ribbon by Bedford Borough Mayor, Dave Hodgson.

The event was be attended by:

I am delighted to be opening the solar farm. This project creates green energy at a former landfill site right here in Bedford Borough. The solar farm is delivering low carbon, clean energy and will encourage others to reduce carbon emissions, adopt innovative technologies and improve air quality. The project has cost £4.15m – with Bedford Borough Council investing over £2.2milion and the project being awarded more than £1.8million from the South East Midlands Enterprise Partnership (SEMLEP) toward the project. We also received additional support from HM Government via the Getting Building Fund which is designed to deliver jobs, skills and infrastructure across the country. I would like to thank them for their contribution.”

Scott Lutton, Vital Energi’s Operations Director explained, “Former open cast landfill sites can be problematic, but Bedford Borough Council have created an innovative solution which will transform the areas into a 21st-century solar farm.  This approach will now generate huge carbon savings which will make a strong contribution to Bedford Borough on its net zero journey.  The topography of the land is quite uneven, which made this a challenging project to install, but we’re delighted with the technical solution and it’s a great, new addition to Bedford’s low-carbon energy infrastructure.”

Bedford Borough Council have set ambitious targets of becoming net-zero by 2030 and the solar array will play an important role in meeting these targets.

Official Opening of the Solar Farm 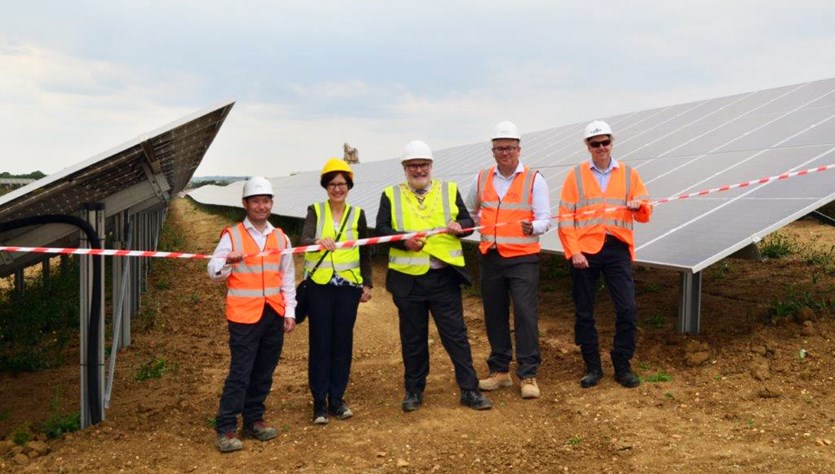 Hilary Chipping, SEMLEP CEO said, “SEMLEP is proud to have supported this fantastic project which contributes to sustainable economic growth and innovation by changing the dial on energy use and attracting new, innovative businesses. In addition to generating clean, green energy it has delivered new jobs and, in collaboration with the universities and college, will support the development of skills in green technologies, all benefitting the communities of the area."