Vital Energi’s work at King’s Cross has proven to be a game-changer when it comes to large-scale developments. By creating an energy solution which evolves alongside the project it has given the developers an added flexibility and set the template for how major construction projects are handled.

The development of King’s Cross is one of the most ambitious urban transformations in Europe.  When finished the 67 acre site will deliver around 25 new office buildings, 20 new streets, 10 new major public buildings, the restoration and refurbishment of 20 historic buildings and structures and 2,000 new homes.

Our involvement has stretched over a decade and has seen us develop an energy solution which evolves alongside the build out, meeting the capacity demand at each phase whilst performing optimally.  This was made more complicated as the King’s Cross development is “Market led” meaning phases are constructed in accordance with demand, resulting in the energy solution needed to be flexible. 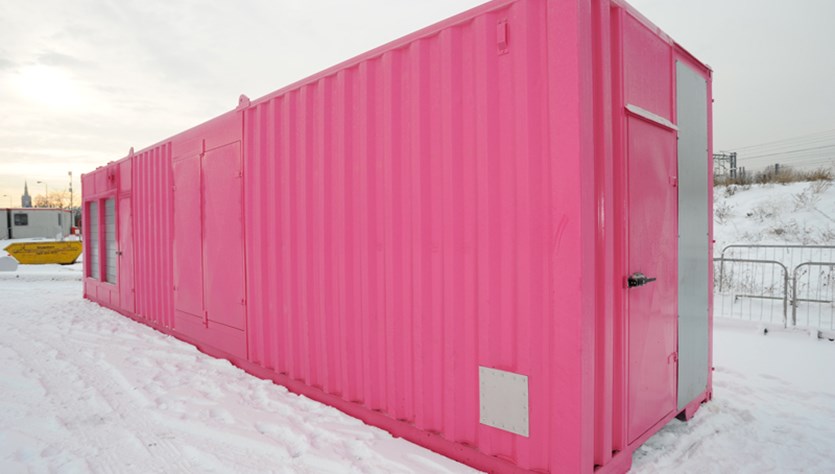 It was clear that creating a large permanent energy centre in the initial stages of the development would be commercially unattractive and cause several technical challenges.  The heating demand from the first phase would be very low which meant a large energy solution would not run efficiently and would also have relatively high operation and maintenance costs. By delaying construction of the main energy centre, it would also allow the developer to postpone the significant capital expenditure both in construction and future costs.

Working with the Energy Services Company (ESCo) we created a temporary, containerised solution which housed two 3MW boilers to serve the initial phase of the project, with the main T1 energy centre scheduled to go live as sufficient development demand increased. The temporary energy centre gave the developers flexibility in that it could be transported to another site to serve a similar purpose, or the plant could be integrated into the permanent energy centre at a later date.

When demand had increased sufficiently we fitted out the permanent energy centre in the underground basement of a car park which had only had the first two storeys built at that stage.  Our designers created a solution which would perform optimally, but leave enough space in the energy centre so that additional plant could be installed as demand increased.

Sustainability is integral to the place being created at King’s Cross. The site-wide district heating network plays a key part in our overall energy strategy and helps to make King’s Cross one of the most sustainable developments in London. We are very proud that working with Metropolitan and Vital Energi we have been able to deliver this important piece of infrastructure and that it is continuing to play an essential role in the high environmental performance of all of the buildings at King’s Cross.

Initially this saw the installation of two 10MW boilers, a 2MWe Combined Heat and Power (CHP) engine and two 74m3 thermal stores. As the energy centre was subterranean, it created some issues with access, especially with the larger pieces of equipment such as the thermal stores.  The project team were able to use the lift shaft to lower the plant into the energy centre and then carefully manoeuvre it into place.   Because the energy centre was quite compact, our team also chose to specify a multitude of prefabricated items, which reduced on site storage requirements, on site works and gave the team more control over delivery times. A key concern when working with space and access restrictions.

In the second phase another 10MW boiler and a second 2MWe CHP engine was added and whilst this phased approach was ideal for the project, it created issues for the installation team, with the largest being the delivery and installation of the boilers. In designing the first phase our designers had been careful to create an access plan for the future boilers and CHP engines, but due to the constricted nature of the energy centre, tolerances were extremely tight. The boilers were therefore delivered through the opening created for the louvres before being placed and installed.

One of the challenges facing us was designing an energy centre in a building which was largely incomplete with another 14 storeys eventually to be added.  Traditionally, the flues for the energy centre would be connected to the outside of the building, but as this wasn’t completed they were designed to be free-standing.  This was a significant undertaking as, to comply with the Clean Air Act, they needed to be 55m in height and due to their proximity to the HS1 railway lines all works needed the approval of network rail.  Once the T1 building was completed we were able to reconfigure the flues and attach them to the side of the building.

Our initial involvement, which began in 2008 with the King’s Cross development, started with the award of a contract to install 2km of district heating pipework. As the project expanded, it was important that our designers sized the pipework sufficiently to meet future capacity of the development.  Based on the King’s Cross anticipated build out accommodation schedules, it was a delicate assessment to ensure the network was not either over or under sized ad either of those carries issues over the life of the network. By designing the network with the future needs in mind it would be capable of serving the entire build out.

Planning permission had stipulated that the energy centre would produce low-carbon cooling, making it a “tri-generation scheme”.  We undertook the feasibility study which demonstrated this was possible and then designed a solution which created chilled water via a variety of methods which includes utilising summer CHP “Spare” heat from the T1 energy centre to produce chilled water via an absorption chiller.  A significant benefit of this was that the excessive heat generated during the warmer summer months could now be utilised, making the overall energy system much more efficient.

When designing the mechanical layout of an energy centre it is important to not only place the plant and equipment in an optimal position, but also ensure there is space for safe operation and maintenance.  Our designers created a two story solution within the cooling pod which comprises of a 1.4MW absorption chiller, three 3MW water-cooled electric chillers, two 1MW dry air-cooled chillers and two 30m³ thermal stores.  Crucially, the solution also has two 2.5MVA transformers which gives added resilience. This solution is capable of delivering 11MW of chilled water and meets the peak cooling demands of the connected buildings which will include office blocks, residential and the King’s Cross Coal Drops facility.

The Low Temperature Hot Water (LTHW) is pumped through an 80m long series 1 twin pipe district heating connection into the Cooling Pod from the T1 energy centre where it is utilised by the absorption chiller to produce chilled water.  The chilled water is then pumped through a 680m series 1 pre-insulated network which connects to the buildings being served.  This will eventually expand to 14 areas including Canal Reach and Handyside offices, Gas Holder Triplets residential blocks and the Coal drops.