MediaCityUK is Europe’s first purpose built creative and media development and has become the new home of the BBC. We were commissioned to deliver a complete low-carbon, trigeneration energy centre and district heating network for the £650m development.

The BBC became the catalyst for the development of MediaCityUK with the announcement of their decision to search for a new Northern Centre, as a result the BBC is set to relocate 5 of its departments to the new northwest site in 2011.

The UK Governments stringent Building Regulations coupled with Peel’s ambitious energy commitment meant it was essential to employ an energy company with experience as well as the depth of knowledge required to help and advise on how best to deliver both the trigeneration system as well as the associated energy infrastructure. With over 25 years of unrivalled expertise in the delivery of decentralised energy generation and distribution projects, Vital Energi were appointed to carry out Phase 1 of the buried district heating network installation connecting the main tri-generation Energy Centre to the surrounding buildings for the purpose of distributing the heating and cooling. 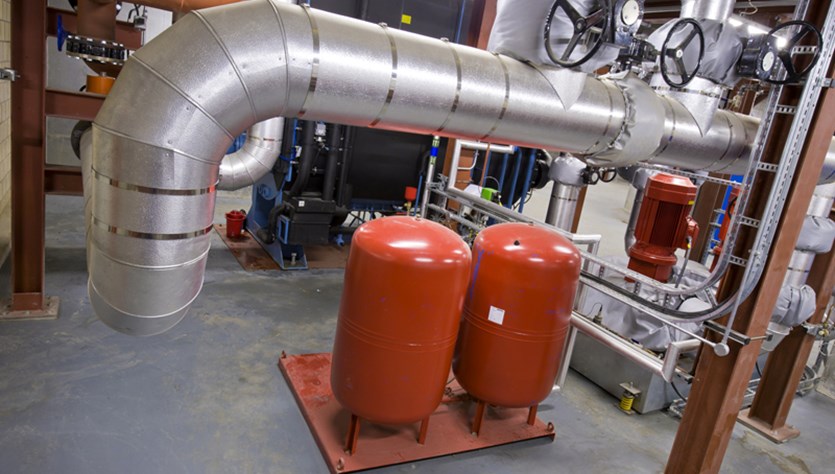 The district heating network comprises of over two thousand metres of preinsulated underground pipe using some of the largest pipe products from Vital Energi’s range; the biggest having a 520mm outer casing benefitting from enhanced longevity through the use of the patented “Band Muff” fusion welded joint system that extends the design life span of the pipe system from 30 to 50 years.

The 40MW trigeneration system simultaneously produces heat, cooling and power through a centralised Energy Centre whereby a Combined Heat and Power (CHP) engine generates heat and electricity simultaneously whilst an absorption chiller creates chilled water from the recovered waste heat which circulates in a water jacket around the CHP engine. The simultaneous generation of energy coupled with the use of recovered energy means that the system operates with very high efficiency compared to traditional forms of energy generation.

Environmental issues are important today but, when the site is up and running in 2011, these issues will be all the more critical. We are working hard to make sure mediacity:uk is future-proof by incorporating the very best environmental and sustainable credentials into every aspect of the development.

The network infrastructure was installed in new spine roads constructed across the development whilst adjacent building foundation works were taking place. Very close co-ordination and co-operation was required to plan and manage the new utility services and building foundation designs, utilising 3D modelling techniques. With over 2,000 people working on the construction of MediaCityUK it is a complex undertaking and Vital Energi worked flexibly with others to optimise the resource planning of the various contractor’s installation works.

Vital Energi’s team of experts are very familiar with the challenges involved on such complex projects and were not only able to integrate easily and flexibly into the larger scheme construction process but also received recognition for their ability to do so in a Safe manner with the award by Bovis of a Health and Safety Award for diligence.

The design takes advantage of the development’s waterside setting located right next to the Manchester Ship Canal by incorporating a novel canal cooling system. The system is designed to extract and recycle canal water which will then be used to cool the BBC Studio buildings in the winter months and provide cooling for absorption chillers and CHP unit during the summer.

By integrating the cooling from CHP with “free cooling” from the canal, this provides for even greater cooling efficiency in the overall system helping to lower energy bills on this high-profile development. The water is returned to the canal cleaner than when it was first extracted which will significantly reduce the impact on the environment.

The energy centre is designed in a modular fashion, to be installed in two phases as the MediaCityUK site develops to its full potential size. Vital Energi have recently handed over the first completed phase of the installation which includes two 9MW gas boilers, a 2MW CHP engine and a 1.5MW absorption chiller which will provide cooling to the BBC film studios.

As the MediaCityUK development expands in future years, phase 2 will meet the future demand for heat and power by the addition of two more 9MW gas fired boilers and a further 2MW CHP engine.