After a successful energy scheme at York Teaching Hospital, the Trust wanted to make similar improvements at their Scarborough and Bridlington hospitals, reducing their energy spend and substantially decreasing their carbon emissions.

Both projects were procured as a joint contract through the Carbon & Energy Framework and, once again, we were chosen to design, install, commission, operate and maintain and act as the Energy Services Company (ESCo). 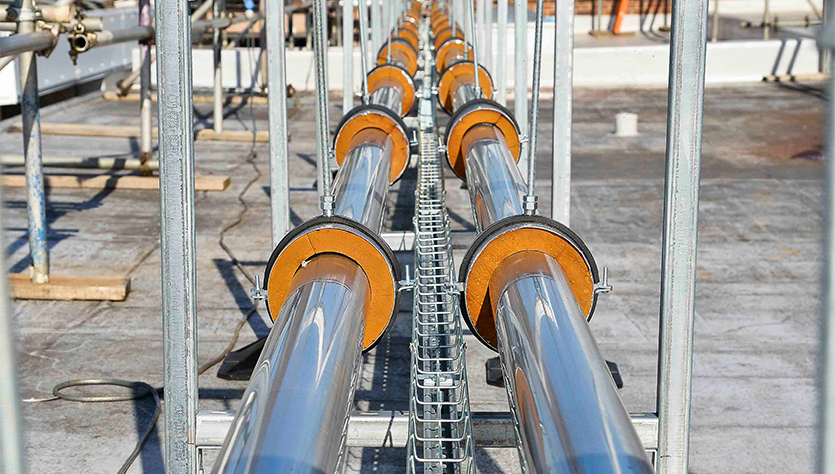 We employed a dual approach on these projects.  Initially we focused on reducing demand through energy conservation measures.  Once we had undertaken the planning for this we could specify energy generating plant which would meet the new, reduced demand.

At both Bridlington and Scarborough, our energy reduction specialists saw the opportunity to upgrade light fittings from outmoded tube lighting to more modern, energy efficient lumens, which would not only save money, but improve the quality of lighting on the hospital premises.  All lighting upgrades were completed and commissioned ahead of schedule.  One all energy reduction measures have been identified, Vital Energi then designs the optimum energy generation solution

1 – Upgrading the energy infrastructure at Scarborough

This CHP was delivered in a containerised unit specifically designed to acoustically reduce the amount of noise.   Due to the size of the equipment, it was delivered on an oversized vehicle and the delivery and placement of the engine had to be carefully planned.  It was then craned from the lorry and into place with only 50mm to spare at some points in the procedure

In addition to the CHP, Vital performed major modification works to the flue headers under instructions from the Trust, completing work in a single 12 hour shift, rather than the original 2 day estimate. Overall, the system will deliver a CO2 reduction of 2,129 per annum over the course of the 15 year contract.

Scarborough Hospital called for a substantial number of client instructed variations completed during the project time frame due to issues uncovered by dilapidation surveys by the Vital Energi project team.  By identifying and addressing all issues it ensured the client had a more robust and reliable steam system and boiler houses and reduced the potential for system failure.

The project called for several phases of work which could have caused potential disruption to the hospital, but through careful management and liaison with hospital departments Vital were able to keep this to a minimum.  Vital would need to shut down the steam, domestic and low temperature hot water systems, but were able to schedule work for weekends and out of hours times to minimise disruption.  Similarly, when the project called for us to install low temperature hot water pipework across the main access route to the NHS stores and waste disposal areas we were able to schedule these works to have the least impact.

3 – Revolutionising the energy infrastructure at Bridlington

At Bridlington Hospital we installed a 238kWe CHP unit which will contribute towards reducing the hospital’s CO2 emissions by 676 tonnes per year, which is a reduction of approximately 44 per cent.  The CHP unit will supply all of the hospital’s night time electricity, over 50% of its day time electricity and make a substantial contribution to the heating and hot water supply.

Our sister company, Vital Efficienci undertook the installation of the Supervisory Control And Data Acquisition (SCADA) system which allows for remote monitoring and control, providing accurate feedback on energy usage and performance which can be used to constantly improve the system, making it more efficient.  This system, which was installed at both sites, also includes a state of the art alarm system, alerting on-duty engineers via text messages, email and phone, allowing them to address any issues at the earliest point.

Vital won the project as they thought differently to others and came up with solutions others didn’t. Vital understood the Trusts requirements and provided significant contributions to realising our aspirations. Vital were the only company to consider keeping the steam network and retaining its reliability and that was what delivered the project successfully.